It has been six years since Tarantino’s film Django Unchained was released. I have watched it many times since then but – and I am ashamed to say – I focused so much on the internal story and its spectacular gore that I kept losing sight of wider issues, such as intertextuality (the internal analogy between Broomhilda and the Nibelungenlied is trivial). Having watched it again last week, a new perspective dawned on me, one that hasn’t been discussed at all in online articles. That is the relation between Django Unchained and Homer’s Iliad, between Django and Achilles. In what follows, I wish to look briefly at the similarities and differences between the two works and the two heroes. 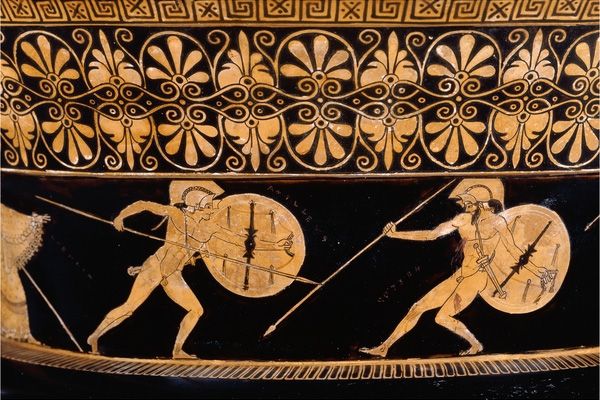 There are important analogies between the two narratives. To begin with the subject matter, both stories focus on the protagonist’s furor – their rage. This is made explicit in both works. The title Django Unchained echoes the invocation in the Iliad about Achilles’ wrath at the beginning of the poem. Neither narrative strays from this pledge. Indeed, Django Unchained may very well have been entitled ‘The Djangoiad’ or the Iliad ‘ Achilles Unchained’. The title of the film works, I would say, like the Iliad’s invocation to the goddess, setting our expectations, but making us hungry for more.

Then, there are the heroes themselves, the area where the two works come closest to each other. I think Django is a kind of Achilles in more than one way. The two stories introduce them as angry men. While their circumstances are different – Achilles is fighting as a free superhero, Django is a chained slave on his way to a new master –, their anger turns out to be determined by love and affection for a woman, and, later, also for a man. In Achilles’ case, it is Briseis (and later Patroclus), in Django’s his own wife. Both women had been removed from them by force and, significantly, had lost their freedom (although there is no evidence that Django’s wife Broomhilda had ever been a free woman). The turning point for Achilles in the Iliad is Patroclus’ death, which makes the hero explore both the depths of grief and the heights of frenzy. This complexity is lacking in Django for reasons I will outline later. Here it suffices to say that both Achilles and Django are driven by affection. Their quest is one for possession: for Achilles, tragic loss, for Django, recoverable love. Affection, yes, but there is also revenge against those responsible for frustrating that possession. For neither of them is simple justice enough. Achilles does not simply kill Hector, Patroclus’ killer. He treats him mercilessly and impiously by dragging his body behind his chariot to camp and then repeatedly around Patroclus’ tomb. Similarly, Django does not merely rescue Broomhilda and runs away from Candyland. He goes back to the survivors and butchers them as they return from Candie’s funeral. One hero’s impiety matches the other’s.

Django and Dr Schultz as Achilles and Ulysses?

The protagonists are surrounded by analogous figures. Ulysses, that man of twists and turns, finds a match in Dr Schultz, who provides an occasion for Django’s furor. As Ulysses persuades Achilles (in parallel myths and especially in Statius’ Achilleid) to fight, Dr Schultz promises to help rescue Broomhilda as long as Django fights his bounty-hunter war. There is no identifiable Hector in Django, only because Django is more of a revenge story than the Iliad. I am tempted to say that Django’s Hector is a cross between Candie and Stephen, the odious, devious black servant.

Schultz’s Ulysses-like qualities can also be seen in the way he engineers Broomhilda’s failed escape. Aided by Django, Schultz plans to defeat Candie from within. He does so by worming his way into Candie’s house, family and business plans and by playing on his greed and pride. Schultz’ strategy is nothing less than Ulysses’, the wooden horse of feigned defeat and fake deals. The destruction of Candyland is a figure of the fall of Troy, but an imperfect one. I shall come back to that shortly.

When I first started thinking about the analogies between the two heroes, I wondered whether we can see Achilles’ foremost character trait in Django. There can be no doubt that Achilles is all about glory and the desire for eternal memory: ‘For he was as one possessed, and was thirsting after glory’ (Iliad, Book 21). Even though he repents of it in the Odyssey (‘I’d rather slave on earth for another man than rule down here over all the breathless dead’), he wishes to be remembered at the price of death. The writing is on the wall the moment he decides to join the expedition. While Django does not choose death over life (although he is willing, at least theatrically, to sacrifice himself for Broomhilda by stepping into Butch’s line of fire), he remembers Schultz’s prophetic words: “You know what they’re going to call you, my boy? The fastest gun in the South.” Django does not seek glory, but glory comes to him as a reward.

At this point, we can start asking why Django does not seek glory. The simple answer is that Django is a post-Christian hero in a non-classical world. His quest is not tragic but redeeming. By rescuing his wife, he puts things right, he makes justice for himself and others, corrects a wrong and saves a person. By limiting his world and his aspirations to a single point, he gains the world, rids the South of one of its worst slave-owners and traffickers in (fighting) human flesh and provides inspiration to other slaves, those witnessing his release from captivity at the beginning of the film and those admiring his cunning and uncompromising resolve at the end, before the final slaughter. Achilles, on the other hand, is dominated by universalist concerns: he wants eternal glory, and he gets it at the cost of thousands of innocent lives. Pereat mundus, fiat gloria. From Achilles’ point of view, the Iliad is a tragedy. From Django’s, his story is a comedy, guaranteed not just by its happy ending, but by the freedom and renewal to which it moves. Achilles realizes his tragic condition, Django is happy to resolve his predicament and cares for nothing else. Achilles is a more complex figure than Django because tragedy makes claims on him from which he cannot escape. Achilles is a hero-unto-death, whose decisions are self-serving, tragic and apocalyptic. A figure of darkness, he is also a foregone conclusion. If there is any light in him, it is his attempt at self-knowledge. Django, from this perspective, is a romantic hero, or better yet, a hero of medieval romance, a Tristan, a Lancelot or an Orlando Furioso. He inherits the world by demeaning himself, by looking at Broomhilda and the ring of fire. He is effaced and self-effacing.

The only tragedy in Django Unchained is Schultz’s. He is also a man-unto-death, but of a different kind. He comes out as a Christic figure, the lamb who suffers willing death for others. His sacrifice is tragic but also redeeming. So is the destruction of Candyland. I have already noted the analogy with the destruction of Troy (itself absent, though anticipated, from the Iliad). The difference between the two is determined by the distance between classical tragedy and post-Christian comedy. The destruction of Troy is in many ways a waste, as Ulysses soon realizes on his journey home. The fall of Candyland and the slaughter of all its white residents, none truly innocent, is a necessity. For Django to realize his full potential – without however realizing it himself – he has to demolish the world that made the conflict possible in the first place. This brings us straight to the heart of the matter. Django fulfills the internal requirements of his vocation – that by liberating Broomhilda, he brings justice and renewal to a fallen world. By hating Agamemnon and killing Hector and other Trojan warriors, Achilles reaches the limits of his world, like Truman in Truman Show crashing his dinghy against the enclosure of his mock universe.