The final canto of Inferno opens, ex abrupto, with one of the most powerful images in the whole of the canticle: a mockery of the 6th-century hymn ‘Vexilla regis’:

“Vexilla regis prodeunt inferni
toward us; and therefore keep your eyes ahead,”
my master said, “to see if you can spy him.”

The hymn’s first line given by Dante translates as: ‘The Banners of the King [of Heaven] go forth’, but the addition of the word ‘inferni’ in canto 34 makes a mockery of the hymn: the banners are those of the infernal king, Lucifer, whose terrifying yet motionless presence at the bottom of Hell is described in the canto. This is just one of the many inversions Dante uses in Inferno to give us a world upside down, the twisted, photo-negative copy of God’s creation. Yet, I think there’s more to the Vexilla Regis caricature than a diabolic inversion.

The first glimpse Dante has of Lucifer is one of a windmill:

Just as, when night falls on our hemisphere
or when a heavy fog is blowing thick,
a windmill seems to wheel when seen far off,
so then I seemed to see that sort of structure.

The commentators agree that the image is radical because windmills were very recent inventions in Western Europe. It has often been said that the first windmills appeared in Northern Europe in the last quarter of the twelfth century. Dante may not have seen one, but he certainly heard or read about them. The image he goes for is that of Lucifer’s featherless, bat-like wings appearing as the blades of a windmill. As the poet later explains, Lucifer doesn’t have just two wings (as usually depicted), but six, two for each head, an inverted image of the six-winged seraph. The perfect correspondence between a windmill and the winged body of Lucifer is made explicit in the text and has been noted by commentators and modern scholars. A point which has not been noticed, and which I wish to make here, is the correspondence between Lucifer-qua-windmill and the opening line from Vexilla Regis. A vexillum, literally ‘a little sail’ (from velum for sail) is a banner, whose shape was usually rectangular, the cloth hanging off a horizontal crossbar suspended from the staff. Used as a military standard in Roman times, it was repurposed by the early-medieval church as a processional banner. The deeper meaning of vexillum as a little sail is alluded to in the canto when Dante says that the Lucifer’s six wings were so broad that he’d ‘never seen a ship with sails so wide’ (vele di mar non vid’ io mai cotali, 34:48). The language is there: vexillum, vele, grand’ali (great wings), molin che ’l vento gira (windmill). On this reading, the infernal banners in the opening line of the canto are the wings preceding Lucifer’s body, whose great span makes them visible from afar before the eye can make out the ‘fuselage’ of Lucifer’s body. The vexilla regis inferni (the banners of the infernal king) are the sails of the windmill, the remarkable metaphor of Lucifer’s six wings whose motion keeps the river Cocytus frozen. The diabolic rewriting of the hymn functions, therefore, as a theological but also as an optical image: the banners go forth visually as Lucifer’s wings are the first thing the poet sees.

The other point I wish to make is more of a speculative interrogation. The Dantean image of Lucifer as a giant windmill, whose motion maintains Hell’s structural integrity (by freezing the Cocytus and keeping the infernal ecosystem in balance) has distant echoes of Cervantes’s famous image of Don Quixote tilting at windmills:

Just then they came in sight of thirty or forty windmills that rise from that plain. And no sooner did Don Quixote see them that he said to his squire, “Fortune is guiding our affairs better than we ourselves could have wished. Do you see over yonder, friend Sancho, thirty or forty hulking giants? I intend to do battle with them and slay them. With their spoils we shall begin to be rich for this is a righteous war and the removal of so foul a brood from off the face of the earth is a service God will bless.”

“Those you see over there,” replied his master, “with their long arms. Some of them have arms well nigh two leagues in length.”

“Take care, sir,” cried Sancho. “Those over there are not giants but windmills. Those things that seem to be their arms are sails which, when they are whirled around by the wind, turn the millstone.” (Don Quixote, Part1, chapter 8). 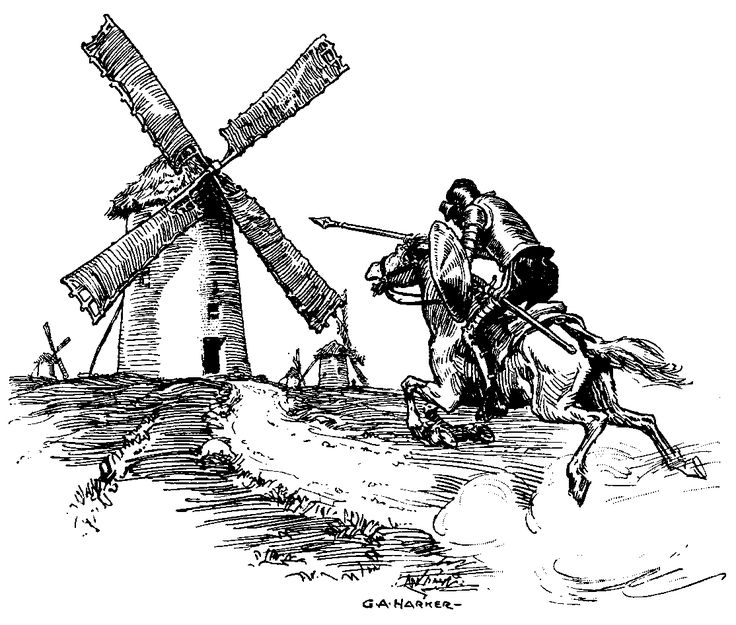 The Knight of the sad Countenance seems to be a strange kind of figura Dantis, a figure of Dante, whose desirous imagination conjures up monsters of the same kind. The windmill-as-monster takes the Dantean metaphor (did Cervantes read Dante?) to the next level, where the image collapses in the protagonist’s/reader’s? imagination only to create a larger- and truer- than-life reality. The evil giant is not like a windmill, he is a windmill.

One thought on “Dante’s windmills”