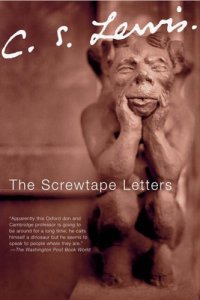 The first of the Screwtape letters was published in The Guardian on 2 May 1941. Thirty more letters followed, one each week. Lewis was paid 2 per letter – but he would not accept the money. Instead, he sent the editor of The Guardian a list of widows and orphans to whom the 62 was to be paid. He did the same with the fees the BBC paid for the Mere Christianity broadcasts, and those The Guardian paid for the weekly instalments of the Great Divorce in 1944-5.

In a letter to his brother Warnie dated July 20th 1940, Lewis wrote: “Before the service was over – one could wish these things came more seasonably – I was struck by the idea for a book which I think might be both useful and entertaining. It would be called As one Devil to Another and would consist of letters from an elderly retired devil to a young devil who has just stated work on his first patient.”

One year later, on the 23rd of December 1941, Lewis was writing to his friend Arthur Greeves thus: “You will also soon see another book by me called The Screwtape Letters, but that was written last year and has been appearing weekly in The Guardian. It consists of letters from an old devil to a young devil on the art of temptation – you see the sort of thing.”